Martin Hodgson started his musical education in 1968 on clarinet. He continued his studies throughout the 70’s  which included first instrument study, music theory, composition with Dr. John Kelsall and performances with the county orchestra.
He started piano tuition at this time and continued taking lessons in London.
where he attended London Jazz Centre Society’s summer school and had tuition from woodwind players such as Alan Wakeman of Soft Machine and Jimmy Hastings from Hatfield and the North.
He had written for, recorded with and performed in numerous bands of varied genres throughout the 70’s and 80’s, but in 1983 he dropped out of university and formed his own style of band, which was to be an inventive precursor to Rachaka, called Knulp.
The music was an eclectic mix of ECM style jazz, baroque influences and folk/rock rhythms. The sound comprised of piano, guitar/mandolin, drums, cello and lyric-less vocals.
This ran for two years between Glasgow and Edinburgh and afterwards he returned to working with rock and pop groups until in 1987 he met percussionist Derek Houghton on one of many session gigs. Together they decided to form Rachaka, a band with even more diverse musical influences, which ran successfully until 1991.
After Rachaka, Hodgson continued to do more session work and wrote soundtracks for short films and TV until 1998 when he met his then future wife and moved to Italy later that year. There he formed another band with bass player, guitarist, vocalist and poet Patrizio Tanzi called Almost Zen which ran for a year until his return to Scotland.
Since then he has been living in the country, a lecturer in contemporary popular music at a further education college and continuing to compose and record his own material,  occasionally for TV, but mainly for himself,  in a variety of genres. 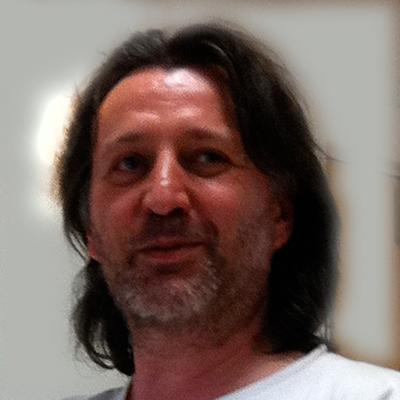 I became interested in playing the drums when a group of school friends got together with their strat copies and home made keyboards and found themselves short on the rhythm front.
On moving to Aberdeen in 1977 to do a degree in Zoology, I met David Cruickshank. David had quite revolutionary ideas for his time and forged the beginnings of a fusion between traditional Scottish/Irish melody and West African drumming. This first took shape in the form of the Afro-Gaelic Ensemble and subsequently evolved into the iconic and more jazz orientated Atsimevu.
My musical ideas in this area were reinforced after spending some time in East Africa as part of research for my degree thesis.
On leaving Aberdeen I travelled to India during which time I studied tabla in the foothills of the Himalaya.
Returning to Scotland, I met dancer Jane Simpson who was using the same space as myself for rehearsal. Drums and Movement naturally gelled and from there I began playing as accompanist for many internationally renowned dancers and choreographers. This led to being commissioned to write soundscores for complete Dance/Theatre productions in both live and recorded settings.
I met George Jackson from Ossian, who embraced the idea of combining my style of percussion with his more traditional medium and we embarked on many an improvised duet at open stage gatherings.
During one of these impromptu sessions I met Martin Hodgson for the first time. It wasn’t till a couple of years later that we met again whilst both acting as session musicians for the same band. The result of this meeting was the formation of Rachaka which ran at frenetic pace from 1987 to 1991.
I met Audicia Lynne Morley during a peace festival in Musselburgh in 1988. Due to technical difficulties, and never having met before, we were thrown together on stage to perform a complete improvisation to a live audience.
This chance encounter resulted in the formation of State Theta - Collaborative Arts Performance Company, which toured extensively from 1990 to 1996 performing and teaching.
Following 2 years of touring with David Glass Ensemble’s ‘Mosquito Coast’ and State Theta’s ‘Gold’ I returned to University to do a Masters degree in Information Technology.
I continue to work on various projects as Software Developer and Data Architect.
In 2005, along with Audicia, we bought and renovated The Old Church Hall in Ormiston, East Lothian. This is now running as State Theta Galleries, a dedicated centre for the development of Movement, Health and The Arts.